Dwyane Wade praises son's 'courage,' growth into who 'she now eventually has come into' 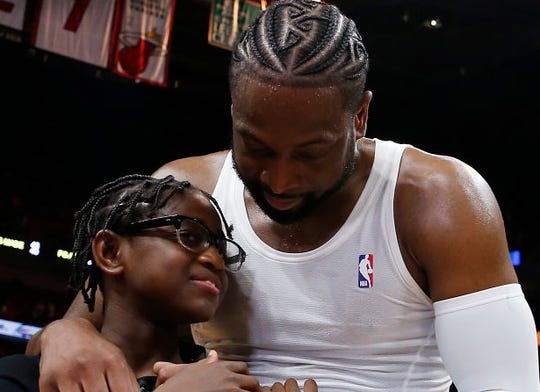 Dwyane Wade is showering his son with support in a recent interview, following attention (both positive and negative) he’s received for supporting the LGBT-identifying youth.

The former professional basketball player, married to Gabrielle Union, praised his son Zion for being authentic.

“You wanna talk about strength and courage, my 12-year-old has way more than I have. You can learn something from your kids,” he said during an appearance on the “All The Smoke” podcast.

Wade advised those who are unsupportive to take a look at themselves in the mirror, something he said he had to do himself.

Using a different pronoun to refer to his son, Wade continued, “I watched my son, from day one, become into who she now eventually has come into.”

This isn’t the first time Wade has been outspoken in his support.

Wade was on the road with the Miami Heat during the Miami Pride parade that Zion and Union attended in the spring – but that didn’t stop the sports star from showing his support. He showed his support from Toronto on his Instagram story, writing “We support each with pride!”

Union, who married Wade in 2014, is Zion’s stepmom. Zion and Wade’s oldest son Zaire, 17, are Wade’s children with ex-wife Siohvaughn Funches. Wade is also dad to son Xavier, 5, with Aja Metoyer and daughter Kaavia, 7 months, with Union, who was born via surrogacy.

Wade also stood up for Zion after a family Thanksgiving photo garnered attention for the child’s outfit choice, which included long nails and a crop top.

The former NBA star addressed the negativity surrounding his fathering and his son with a series of thoughtful tweets.

Wade’s support has garnered positive attention from others, including 2020 Democratic hopeful Julián Castro.

“As a father, @DwyaneWade is an inspiration — using his platform to make the world a safer and better place,” he tweeted. “His unconditional love for Zion will give other parents the courage to love and respect their children for who they truly are.”

Posted by mediaadmin at 2:07 PM