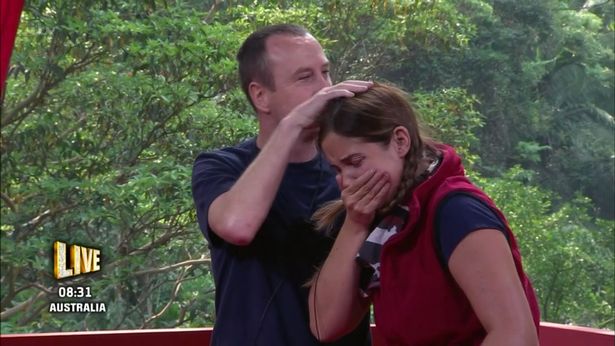 The 27-year-old, who is best known for playing Lauren Branning in EastEnders, was crowned this year's Queen of the Jungle – beating favourite Andy Whyment and fellow finalist Roman Kemp.

Soap actress Jacqueline was utterly stunned to have been named 2019's champion and was speechless after being handed the crown.

Speaking to Ant and Dec afterwards, she said: "I can't believe I've done all that stuff."

In an emotional moment, she said that she felt the show had been a "turning point" in her life.

She also spoke about how it had helped her re-evaluate her life.

"I think it's so easy to care about what other people think," she said. "I try to change [trolls'] opinion… I had amazing people bigging me up constantly [in the jungle]."

After her name was announced as the winner, she gushed: "I love my family, I love Daniel, I love my kids."

Ever since she entered the jungle, she has faced a number of gruelling challenges after being continuously voted to do a number of Bushtucker Trials.

However the actress triumphed over her biggest fears and has the backing from a number of ousted campmates including Ian Wright and James Haskell.

Yet it wasn't only the trials that Jacqueline had to face in the jungle and, in unaired scenes, threatened to quit the show after co-star Myles Stephenson told her that he thought husband Dan Osborne cheated on her with his ex Gabby Allen .

In an unprecedented move, bosses allowed Jacqueline to leave a voicemail for Dan about what she had heard, and for him to leave one for her.

Chloe claimed to The Sun that after a night of boozing and partying – which saw the stars papped together – they went back to a hotel and engaged in sexual activity together.

However Dan denies being unfaithful to Jacqueline, who is currently in the I'm A Celebrity jungle and will be unaware of these news claims.

A representative for Dan told Mirror Online: "This story is not true and Dan will be seeking legal advice."

Natalie's representatives refused to comment on the story when we contacted them.

Posted by mediaadmin at 5:37 PM