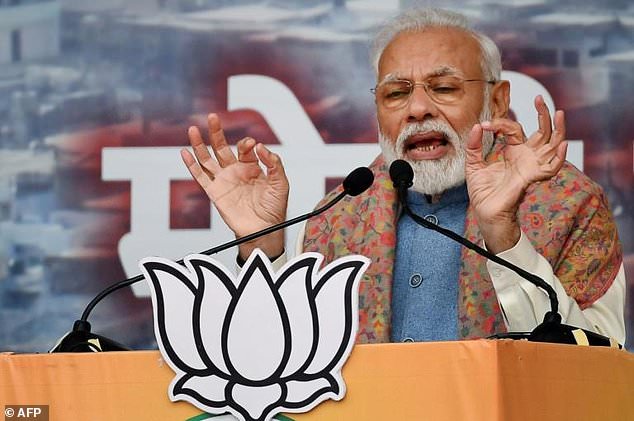 Prime Minister Narendra Modi sought Sunday to reassure India’s Muslims over a new citizenship law that has sparked deadly protests and put his Hindu nationalist government under pressure like never before.

At least 25 people have died in almost two weeks of demonstrations and violence after Modi’s government passed the law criticised as anti-Muslim.

More protests took place on Sunday in the Hindu-majority nation. 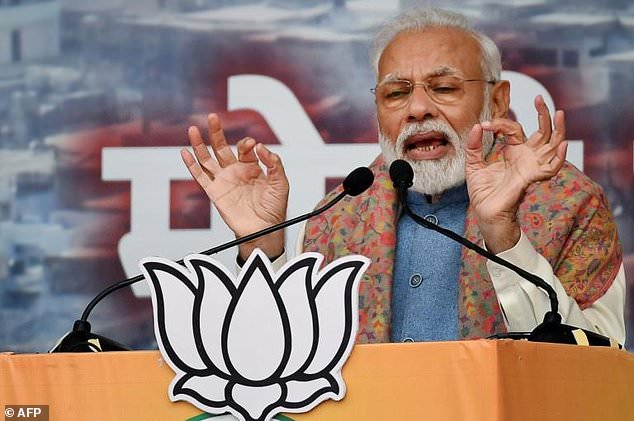 Addressing party supporters in New Delhi – who cried ‘Modi! Modi!’ at the mention of the law – the prime minister said Muslims ‘don’t need to worry at all’ provided they are genuine Indians.

‘Muslims who are sons of the soil and whose ancestors are the children of mother India need not to worry,’ Modi, 69, told the crowd of thousands.

Accusing the main opposition Congress party of condoning the violence by not condemning it, Modi said opponents were ‘spreading rumours that all Muslims will be sent to detention camps’. 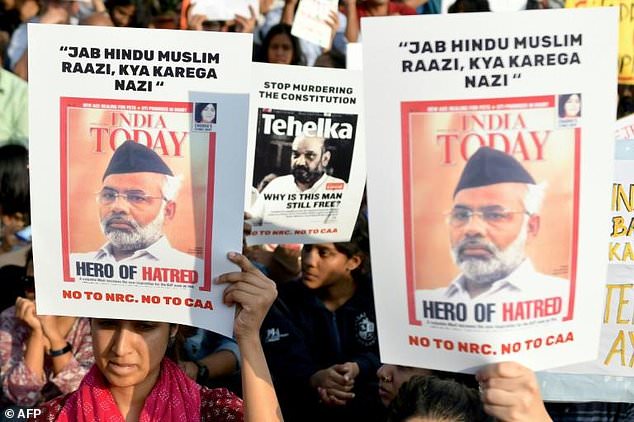 Despite the prime minister’s assertion, the northeastern state of Assam has six detention centres holding more than 1,000 alleged illegal migrants, and plans another 11.

India’s junior home minister has told parliament that 28 detainees have died in the camps in recent years.

The Home Ministry in June issued a ‘2019 Model Detention Manual’ to states, asking them to set up camps in major entry points. 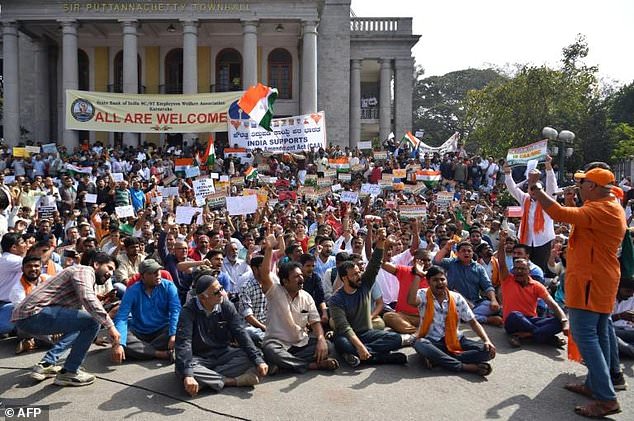 People demonstrate in Bangalore to support India’s new citizenship law, which is criticized as anti-Muslim

Two centres were planned near the cities of Mumbai and Bangalore.

Modi also said that there had been ‘no discussion’ about a nationwide ‘register of citizens’, which many Muslims in India fear is targeted mainly at them.

Home Minister Amit Shah, Modi’s right-hand man, has said repeatedly that such an exercise will take place aimed at removing all ‘infiltrators’ from India.

The ruling party also promised in their 2019 national election manifesto to implement NRC in a ‘phased manner in other parts of the country’.

This year such a register in Assam state left off 1.9 million people unable to prove they or their forebears were there before 1971. They now face possible statelessness.

Demonstrations against the citizenship law have been largely peaceful but protesters have also hurled rocks and torched vehicles, while heavy-handed police tactics including the storming of a Delhi university a week ago have fuelled anger.

Tens of thousands of protesters gathered late Saturday in the southern city of Hyderabad. Other large demonstrations took place on Sunday, including in Jaipur and Mumbai.

In Bangalore other protesters gathered to support the law.

It gives religious minority members — Hindus, Sikhs, Jains, Parsis, Christians and Buddhists — from three neighbouring Islamic countries an easier path to citizenship, but not if they are Muslim.

Islamic groups, the opposition and others at home and abroad fear this forms part of Modi’s aim to marginalise India’s 200 million Muslims and remould the country as a Hindu nation. 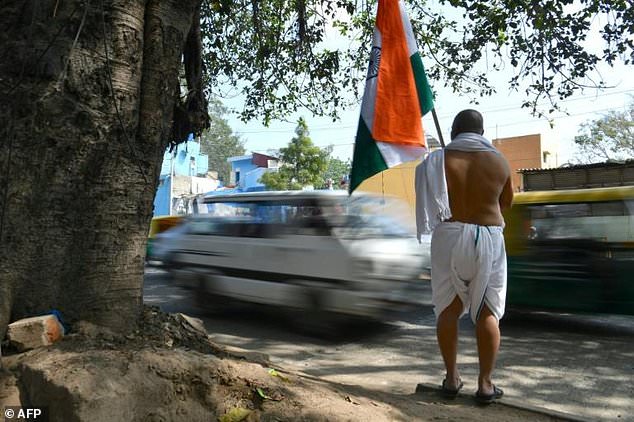 Authorities have imposed emergency laws and blocked internet access across the country in an attempt to contain the unrest.

More than 7,500 people have either been detained under emergency laws or arrested for rioting, according to state officials.

Five thousand of them are being held in the northern state of Uttar Pradesh state where 17 people have been killed.

The state’s government has said it will confiscate and auction properties of those involved in arson and destruction of public properties to recover damages.

Police said they sealed 70 shops owned by accused rioters in the state’s Muzaffarnagar district, where two protesters were killed on Friday.

About 500 people, more than half of them police, have also been injured in Uttar Pradesh.

Two people were shot dead in the southern state of Karnataka and six died in Assam in the northeast last week.

In Assam, opponents of the citizenship legislation fear it will enable large numbers of Bengali-speaking Hindu immigrants to settle there.

But elsewhere, opponents say the law has made religion a test for citizenship ahead of a nationwide register that Modi wants to carry out by 2024 to remove all ‘infiltrators’.

Modi’s government, re-elected in May, has defended the law saying it is meant to help ‘persecuted’ minorities from Muslim-majority Pakistan, Bangladesh and Afghanistan.

Posted by mediaadmin at 9:09 PM