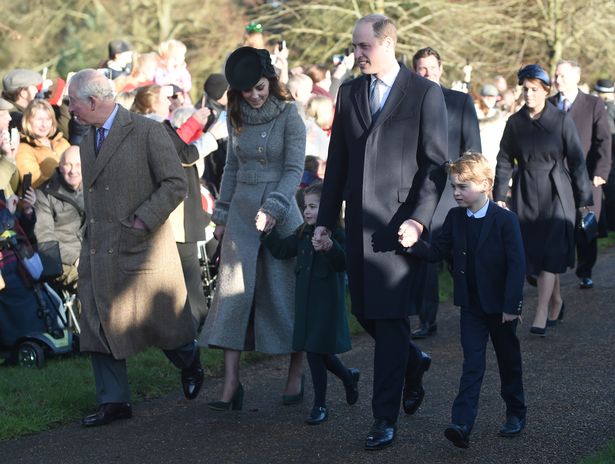 Prince George and Princess Charlotte have arrived at the Queen's Sandringham estate for their traditional morning service at St Mary Magdalene Church.

George, aged six, and four-year-old Charlotte walked the short distance from Sandringham House to St Mary Magdalene Church hand in hand with their parents while Prince Charles walked alongside them.

The Queen, 93, was also spotted at the Norfolk estate wearing a bright red hat and matching suit along with the Duchess of Cornwall.

Prince Louis stayed at home with Kate Middleton's parents as he is still too young to join them on the stroll, which has become a Christmas tradition.

For live updates of the royal's Christmas Day at Sandringham follow our blog .

Andrew's daughter Princess Beatrice also joined the service with fiance Edoardo Mapelli Mozzi for the first time after being invited by the Queen.

Prince Philip, who was undergoing treatment for a undisclosed health issue, was discharged yesterday before flying by helicopter to the private estate in Norfolk.

The Duke of Edinburgh, 98, who was discharged from hospital on Christmas Eve, is not attending the church service.

Philip, who retired from public duties in 2017, did not attend last year's church service either despite being in good health at the time.

The Duke of York, who has had a tumultuous end to the year after his disastrous appearance on the BBC's Newsnight programme, walked side by side with Charles to a service at 9am but did not attend the 11am service.

Andrew's attempt to explain his relationship with convicted sex offender Jeffrey Epstein backfired and he was heavily criticised for showing a lack of empathy towards Epstein's victims and remorse over his friendship with the disgraced financier.

The Duke and Duchess of Sussex were also absent this year, instead opting to spend seven-month-old Archie's first Christmas with the Duchess's mother, Doria Ragland, in Canada.

The Earl of Wessex and daughter Lady Louise were also pictured heading to the early service and were swiftly followed by Andrew and Charles.

Posted by mediaadmin at 4:37 AM